Are There Biblical Principles In the Constitution?

23 Jun Are There Biblical Principles In the Constitution? 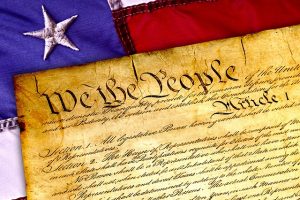 Was the Constitution Based on Biblical Principles?

In this article, I’ll share specific excerpts from the Constitution and how they compare to verses in the Bible. This way, you’ll be able to draw your own conclusion about how the Bible and Christian beliefs impacted the founding and shaping of our nation.

“We the People of the United States, in Order to Form a More Perfect Union…”

The United States Constitution was officially signed September 17th of 1787. This historical document defined the role of America’s government and how it must operate. It divides equal power between three different branches of government to ensure proper checks and balances. It also defines the rights of the states and amendment process. Lastly, the United States Constitution declares that it is the highest law of the land.

The Founding Fathers had a vision to create a society that had never been seen before, a vision where society would rule the government, not the other way around. In the eyes of these men, they worked towards creating a “more perfect union” by giving the power back to the people and establishing a society where humanity could come together in harmony. There are many bible verses this concept parallels:

“Behold, how good and how pleasant it is For brethren to dwell together in unity!”

“But above all these things put on love, which is the bond of perfection.”

“Also the hand of God was on Judah to give them singleness of heart to obey the command of the king and the leaders, at the word of the Lord.”

“Only let your conduct be worthy of the gospel of Christ, so that whether I come and see you or am absent, I may hear of your affairs, that you stand fast in one spirit, with one mind striving together for the faith of the gospel, and not in any way terrified by your adversaries, which is to them a proof of perdition, but [a]to you of salvation, and that from God.”

“But we all, with unveiled face, beholding as in a mirror the glory of the Lord, are being transformed into the same image from glory to glory, just as by the Spirit of the Lord.”

Unity and transformation are a recurring theme found in the Bible and also in the Constitution. The Founding Fathers understood that we can only move towards perfection and unity when Christ is involved.

While God is merciful, He is also just. Justice is when the level of the outcome must be determined by the level of the input. For example: the more serious a crime, the more serious a sentence. Another example would be those who work hard will be rewarded with what they are due. Justice should not be determined by the person being judged, but rather by that person’s works. Justice plays an important role in determining the morals of a nation and how people within the society are to be treated. Likewise, a big recurring message throughout the Bible is treating and loving each other how you would want to be treated. Here are some bible verses that back up this conclusion:

“It is a joy for the just to do justice, But destruction will come to the workers of iniquity.”

“Depart from evil, and do good; And dwell forevermore. For the Lord loves justice, And does not forsake His saints; They are preserved forever, But the descendants of the wicked shall be cut off. The righteous shall inherit the land, And dwell in it forever.”

“You shall do no injustice in judgment. You shall not be partial to the poor, nor honor the person of the mighty. In righteousness you shall judge your neighbor.”

The vision of America was to create a society where people where judged on their actions rather than the amount of money they had or the color of their skin. Justice is vital to creating a united society that flourishes and succeeds.

God doesn’t just want peace between believers, He wants you to have peace with everyone! The Bible says that this is one way others will know you are a Christian, by how you treat people. If everyone were to just treat each other with kindness and how they would want to be treated, imagine the advances society could take. Here are some bible verses about what God thinks about domestic tranquility:

“If it is possible, as much as depends on you, live peaceably with all men.”

“Therefore I exhort first of all that supplications, prayers, intercessions, and giving of thanks be made for all men, for kings and all who are in authority, that we may lead a quiet and peaceable life in all godliness and reverence.”

“And seek the peace of the city where I have caused you to be carried away captive, and pray to the Lord for it; for in its peace you will have peace.”

Before the Constitution was written, states often threatened to raise rebellions or start wars between one another. One reason for the Constitution is to define the abilities of the states and the federal government so that peace can be kept within the country. A peaceful country is a flourishing country!

“Provide For the Common Defense…”

This part of the Constitution establishes one of the main roles of the federal government, which is to protect its states and see to the defense of the nation. Another aspect of this is providing ambassadors to represent the country to others. It is a nation’s duty to protect its citizens and see to the common defense of its people. The Bible also speaks in depth about protecting and defending your family. Here are some bible verse to back this up:

And I looked, and arose and said to the nobles, to the leaders, and to the rest of the people, “Do not be afraid of them. Remember the Lord, great and awesome, and fight for your brethren, your sons, your daughters, your wives, and your houses.”

And what more shall I say? For the time would fail me to tell of Gideon and Barak and Samson and Jephthah, also of David and Samuel and the prophets: who through faith subdued kingdoms, worked righteousness, obtained promises, stopped the mouths of lions,  quenched the violence of fire, escaped the edge of the sword, out of weakness were made strong, became valiant in battle, turned to flight the armies of the aliens.

The ability to have a standing military, even in peacetime, is one of the ways the federal government works to protect the people of the United States. Not only does the military protect us from our enemies, but they also work in times of crisis, like national disasters and division.

God is own your side; He wants you to succeed. He is all about promoting your general welfare. This can be seen in bible verses like Jeremiah 29:11, “For I know the plans I have for you,” declares the Lord, “plans to prosper you and not to harm you, plans to give you hope and a future,” and 3 John 1:2, Beloved, I pray that you may prosper in all things and be in health, just as your soul prospers.

Not only does God want you to succeed, He wants everyone to succeed. By stating a need to “promote the general welfare,” the Constitution is recognizing that one of the roles of the government is to ensure avenues and incentives where the American people can succeed and prosper. Here are some bible verses about how a nation should see to this need:

that you also aspire to lead a quiet life, to mind your own business, and to work with your own hands, as we commanded you,  that you may walk properly toward those who are outside, and that you may lack nothing.

Based off of the context of the Constitution, it’s the government’s job to encourage the creation of jobs, provide incentives for business owners, and establish regulations to ensure healthy competition takes place in the market. When this is successfully done, then people will be able to function and prosper much more easily, and when people prosper, the economy prospers. This is the way to building a prosperous nation.

“Secure Blessings of Liberty to Ourselves and Our Posterity…”

This next part of the Constitution is the essence of its existence, “to secure blessings of liberty to ourselves and our posterity.” In other words, this means to ensure that this generation and the next are able to experience and live in freedom.

Ronald Reagan once said, “freedom is never more than one generation away from extinction.” When the Constitution says to “secure the blessings of liberty to ourselves and future generations,” it means that we need to effectively train younger generations what it means to be free. Raising up the next generation is a recurring topic that God addresses over and over again in the Bible:

Train up a child in the way he should go: and when he is old, he will not depart from it.

Grandchildren are the crown of the aged, and the glory of children is their fathers.

Hear, O sons, a father’s instruction, and be attentive, that you may gain insight, for I give you good precepts; do not forsake my teaching. When I was a son with my father, tender, the only one in the sight of my mother, he taught me and said to me, “Let your heart hold fast my words; keep my commandments, and live. Get wisdom; get insight; do not forget, and do not turn away from the words of my mouth. …

After reading this article, you may have come to the conclusion that the Bible actually has a lot to say about our rights as humans and how the government should function. If you want to learn more, check out my article What Does the Bible Say About Property Rights.