Why Are There Bibles In Hotel Rooms? 29 Dec Why Are There Bibles In Hotel Rooms?

If you have spent any amount of time in a hotel room, you have likely come across a Bible in the drawer of the nightstand. You likely considered this a nice gesture as you closed the drawer and went on your merry way. Perhaps finding this Bible in the hotel room planted a seed and you wondered how the Bible got there. Are there always Bibles in hotel rooms? It certainly seems like an odd thing to place in the nightstand for a weary traveler to find during their stay.

The history of The Gideons International and how this group began distributing Bibles to hotel rooms across America, and eventually the world, is quite fascinating! In this post, we will take a closer look at why there are Bibles in hotel rooms. We will also discuss the rapid decline in hotels that allow Bibles in their hotel rooms in recent years.

Understanding Why There Are Bibles in Hotel Rooms

The History of Bibles in Hotel Rooms

To fully understand the history of Bibles in hotel rooms, we must first take a look at the organization that continues to provide Bibles to hotel rooms today. The Gideons International is a Christian association that was founded in Wisconsin in 1899 by two young Christian businessmen.

After meeting in a hotel room during their respective business trips, John H. Nicholson and Samuel E. Hill developed the association based on a desire to encourage and unite traveling salesmen. They understood the need to encourage young professionals and businessmen while they were on the road for work. They did not begin to distribute Bibles to hotels until several years later in 1908.

The first free Bibles provided for hotel rooms were given to the Superior Hotel in Superior, Montana in 1908 upon the hotel’s completion. This was the start to the primary mission of The Gideons International, distributing free copies of the Bible to hotels in America and around the world.

Why Do Gideons Leave Bibles in Hotel Rooms?

According to The Gideons International, their mission behind leaving Bibles in hotel rooms is this: “We believe distributing copies of God’s Word plants powerful seeds God can use according to His own timing (I Corinthians 3:6), allows many to read the truth for themselves (John 8:32), provides a lasting witness (Hebrews 4:12), and makes it easier for those we reach to boldly spread the Good News (II Timothy 2:2).” 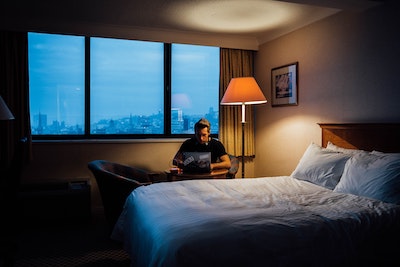 At the start of their mission to place Bibles in hotel rooms, a member of The Gideons International would meet with the hotel manager upon the opening of a new hotel in their town. During their meeting, they would present them with a Bible. They would then offer to place a free Bible in every room of their new hotel.

Currently, most major hotel chains allow the franchise owner to decide whether or not they will place Bibles in the rooms of their specific location. It used to be quite commonplace with the majority of hotels allowing Bibles in their hotel rooms. However, this is becoming less popular as the years pass.

Unfortunately, many hotel chains are stepping away from the tradition of having a Bible in the nightstand of each room. There are several reasons for this change. Some of these include marketing purposes, inclusivity, and a desire to simplify the rooms of their establishments.

Where Do the Gideons Distribute Bibles?

The most common place for members of The Gideons International to distribute Bibles is to hotels. However, this is not their only focus.

The Gideons International is also responsible for distributing Bibles in prisons, hospitals, medical centers, nursing homes, military bases, and more. Additionally, they have distributed Bibles in public schools to middle and high-school-aged children.

Are There Bibles in Every Hotel Room?

As mentioned previously, many large hotel chains allow the individual franchise owner to decide whether or not they will place Bibles in their hotel rooms. While at one time, Bibles were a commonplace sight in a hotel room, this is becoming much less frequent. In studies conducted by the hospitality research group, STR, we find some astonishing facts regarding the decline of Bibles in hotel rooms.

However, there are several hotel chains, such as Marriott, that refuse to give up the tradition of placing a Bible in every hotel room. Founded by a devout Mormon, Marriott hotels include a Book of Mormon in addition to the free Bible provided by The Gideons International.

Who Decides Whether There Are Bibles in Hotel Rooms?

Most major hotel franchises allow the manager or owner of each location to decide whether they will accept the offer from The Gideons International to put a Bible in their hotel rooms. However, there are a few hotel chains that have removed this freedom, instead enforcing company-wide policies regarding the topic.

Some hotel chains have stopped providing religious materials such as the Bible altogether. Others, however, have simply moved their Bibles to a central location where guests can request a Bible for use during their stay.

Benefits of Having Bibles in Hotel Rooms

There are many benefits to having Bibles in hotel rooms. Here are just a few of the reasons why The Gideons International, believe that distributing Bibles to hotel rooms is a worthy mission.

Whether you have religious affiliations or not, traveling can be a lonely time. This is especially true for people who travel often for work. In moments of loneliness, a Bible in the nightstand can provide a ministry opportunity for someone who would otherwise not have that exposure.

May Offer Hope to Someone in a Moment of Despair

Unfortunately, many people find themselves in hotels in moments of despair. Whether they are contemplating suicide, trying to recover after a massive loss, or picking up the pieces of their lives, this can be a critical time of transformation.

The Bible can provide incredible hope to someone in their greatest moments of despair. In addition to the entire Old and New Testaments, the Bibles provided by The Gideons International also include a brief explanation of how to accept salvation. They also provide information on how to learn more.

Furthers the Message of the Gospel

Finally, by placing Bibles in hotel rooms, The Gideons International hopes to further the message of the gospel to people who would otherwise have no exposure. You never know what simple action or gesture can completely transform the trajectory of someone’s life.

Other Religious Books in Hotel Rooms

Of course, the Bible is not the only religious book that can be found in hotel rooms. This is especially true in other countries. As we mentioned previously, Marriott hotels offer a copy of the Book of Mormon alongside the Bible. Hotels in the Middle East often provide a Quran, and hotels in Asia may provide The Teaching of Buddha. The religious materials you may find in your hotel room depend greatly on the region you are visiting. It also will depend on the policies of the hotel chain.

While many of us have come to expect Bibles in hotel rooms, this is a tradition that is quickly declining. By learning the fascinating history of The Gideons International, we can have greater respect and appreciation for the men and women who have carefully carried out this calling for over 100 years.

Thank you for reading! You can learn more about promoting equality, liberty, and justice for all here.