Why Is Religious Freedom Important? 19 Aug Why Is Religious Freedom Important?

What You Should Know About Religious Freedom

As Americans, we have had the incredible privilege of living in a nation that offers immense religious freedom. From the foundation of our nation, religious freedom has been something that was considered an essential part of our country.

Religious freedom is a concept that is promoted and upheld largely by the Christian community. However, this is an important topic for members of any religion! Because of our religious freedom, we can live, learn, worship, teach, and work peacefully alongside others who do not share our beliefs.

Unfortunately, with each passing year, our religious freedoms are becoming fewer and fewer. Due to government restrictions, policies, and restrictions, Americans are facing tough decisions regarding how they should respond. This is a topic that is of utmost importance to us as Americans, but more importantly, as Christians.

In this post, we will discuss the importance of religious freedom in the hopes that you will be better equipped to defend and protect this foundational concept.

What is Religious Freedom?

Merriam-Webster defines the freedom of religion as: “the right to choose what religion to follow and to worship without interference”. Religious freedom allows individuals to peacefully live out their religious beliefs both in private and public.

It not only protects our ability to worship in public places but also ensures that we do not have to compromise our core religious beliefs due to the government or culture. While religious freedom is upheld largely by Christians in America, it protects individuals practicing any religion.

Origins of Religious Freedom in America

Religious freedom in America is nearly as old as the nation itself. The First Amendment to the United States Constitution reads as follows, “Congress shall make no law respecting an establishment of religion, or prohibiting the free exercise thereof; or abridging the freedom of speech, or of the press; or the right of the people peaceably to assemble, and to petition the Government for a redress of grievances.”

Our founding fathers understood the importance of religious freedom and penned these crucial freedoms into existence. Today, over 200 years later, we continue to benefit from this foundational belief of our country.

Does Religious Freedom Only Benefit Christians?

No! This is a common misconception in the Christian circle. Religious freedom protects everyone – regardless of their personal beliefs (or lack thereof). Religious freedom in America ensures that each individual can freely practice, share, and believe in whatever they wish.

As Christians, we know that there is only one true way to heaven – through Christ. However, religious freedom, as a concept, protects those of other beliefs. 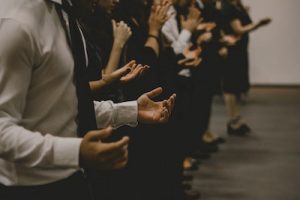 There are countless benefits to religious freedom. It is easy to take our religious freedom for granted simply because the majority of us have known no different. We must remember that these benefits are incredible blessings that many (if not most) other countries do not experience.

Religious Freedom Allows Us to Freely Worship in Public

Perhaps the most frequently discussed benefit of religious freedom in America is that it allows us to freely worship in public. Not just in churches and synagogues, and mosques but also in public parks and common places.

In many other countries where religious freedoms do not exist, believers are unable to worship in public – instead, they must gather in secret.

Religious Freedom Allows Us to Express Our Religion Publically

Many outreach and service organizations receive support from religious groups. Because of the religious freedoms we experience in America, these organizations can serve those in their communities.

From homeless shelters to soup kitchens, addiction recovery centers to pregnancy resources, millions of individuals receive services through these religious organizations each year.

What Happens if We Lose Our Religious Freedom in America?

In an article for Answers in Genesis, Troy Lacey writes, “Increasingly governments, groups, and individuals view religion as something you are free to practice behind closed doors but that shouldn’t be allowed to influence your public life. As we’ve said many times, freedom of religion without freedom to practice or voice your faith according to conscience is not freedom at all; rather it is merely a facade of civic freedom.”

He goes on to say, “For those of us who live in most westernized countries, we have laws that legislate civic religious freedom, protect us from persecution, and allow us to voice and practice our faith. Those laws, however, are being challenged, restricted, reduced, or eradicated in almost every country that once viewed them as inalienable rights. There almost certainly will come a time when leaning on civic laws to protect our religious freedoms will not be possible.”

We Must Remain Steadfast in Our Beliefs

As Christians, we know that our ultimate responsibility is to Christ, not to our government. In the event that we lose our religious freedom in America, we must take our cue from our persecuted brothers and sisters around the world. In regions where it is not only unsafe but illegal to serve Christ, these faithful believers remain steadfast.

Protecting Our Religious Freedom in America

Perhaps the best way to protect religious freedom in America is to vote for officials who support this belief! Far too many Christians in America are passive participants in politics. It is important to educate ourselves on candidates at every level of government – from city council to the president.

Support officials who are running on platforms that support religious freedom. Vote for them and encourage others to do the same. Never underestimate the power of one voice for good in these important conversations.

Educate Yourself on Principles of Religious Freedom

While nearly everyone understands the phrase ‘religious freedom’, few fully comprehend what this means for us in America. Do you know what your rights really are regarding this topic? What someone can request that you do or do not do versus what is legally permitted?

One of the greatest detriments to our religious freedom is that too few Americans understand what these freedoms mean. You must educate yourself on the principles of religious freedom. Know your rights so that you can defend them and educate those around you to do the same.

Pray for Our Nation

Finally, pray for our nation. We know that we are blessed beyond measure to still enjoy the religious freedoms that we have in America. There are countless other countries where this is not the case. However, while we currently enjoy religious freedom, we know this will likely not always be the case.

As we continue to watch the world change around us, we must remember to pray for our country. Pray for our leaders, pray for the generation that is rising up to fight for our rights and civil liberties. Pray for Christians in America, that we would grow in boldness and continue to defend our beliefs in the midst of cultural shifts.

Doing so will not only allow us to develop a greater appreciation for religious freedom but also grow more steadfast in our desire to defend this freedom.