What Does the Bible Say About Protesting? 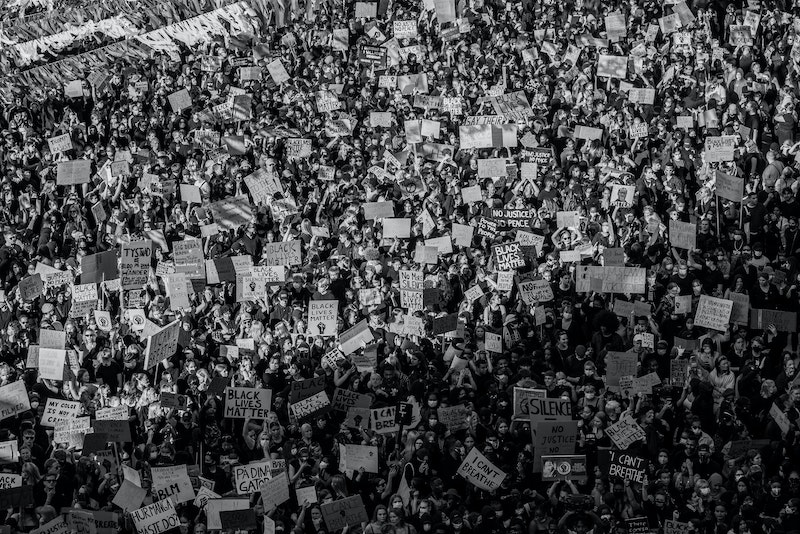 01 Feb What Does the Bible Say About Protesting?

Understanding a Biblical View of Protesting

Now more than ever before, protesting seems to be a common response to social and political disagreements and upsets. Is this a proper response for Christians to have? Are there more effective ways to communicate our beliefs and stand up for the oppressed? These are important questions that we must ask ourselves before acting rashly in a strictly emotional response.

What does the Bible say about protesting? While the Bible does not directly address the topic of protesting, we can gain much insight from how Jesus spent His time on earth. Although Jesus was not necessarily leading His disciples in protest, He did push back against the societal and cultural norms of the time. There is nothing fundamentally wrong with Christians protesting, as long as it is a peaceful protest done with the right motives.

So, how do we determine if a cause is worth protesting? Is it better for Christians to choose alternative methods of standing up for the oppressed? What are some things to consider before joining in protest of a social or political event?

In this post, we will cover those important questions as well as many others. We hope to provide insight into this topic, educating Christians on how they can practically protect their rights and stand up for the rights of others.

Protests are often used to bring awareness to an unjust cause or defend an oppressed people group. They can be a powerful way to influence change in our society by educating others on the injustice or oppression that has occurred.

In America today, protesting is seemingly becoming a hobby with protests occurring for nearly every political or social event. While it is certainly important to stand up for your beliefs and the rights of yourself and others, protesting often gets out of hand.

Often an emotionally charged demonstration, protesting in America is now sadly synonymous with rioting. This should not be the case! Our founding fathers understood the importance of standing up for your beliefs. In the First Amendment to the United States Constitution, they protected this very right.

The First Amendment reads as follows, “Congress shall make no law respecting an establishment of religion, or prohibiting the free exercise thereof; or abridging the freedom of speech, or of the press; or the right of the people peaceably to assemble, and to petition the Government for a redress of grievances.”

As Americans, we have the right to freedom of speech and the right to peacefully assemble, this is the very definition of protesting. However, where protesting often goes awry is when participants overlook the second part of the statement. A protest that becomes violent, or threatens to harm other people or property is no longer a protest, it is a riot.

Protesting Against Injustice As a Christian 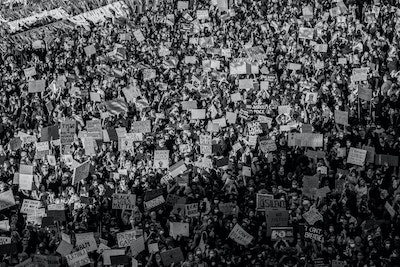 Although our Constitution protects our right to protest peacefully, what does the Bible say on the matter? As Christians, we must constantly weigh our decisions against the truth found throughout Scripture.

As mentioned previously, Jesus spent His time on earth pushing back against societal and political norms. While He was not leading His disciples on protests through the streets of Jerusalem, He was pushing against the systems in place. His followers soon began to mirror this peaceful defiance.

By observing these actions, we learn that there is nothing wrong with peacefully protesting. In fact, protesting can be a great way to stand up for the rights of the oppressed, something we are called to in Scripture. However, we must take great caution to protest only causes that are worthy of our attention. We must not join a protest simply because of social pressure or emotionally-charged fury.

Let’s take a closer look at a few important things to consider regarding protesting against injustice as a Christian.

Standing Up for The Rights of The Oppressed

Throughout Scripture, we are called to stand up for the oppressed and those who are less fortunate than ourselves. As Christians, we must not overlook this important calling, instead looking for ways to actively fight injustice.

In many cases, protests are initiated because the rights of a person or people group have been oppressed or denied. A few examples of this are protests against abortion clinics and protests against racial injustice. We know that every person is made in the image of God. Additionally, we are granted certain rights and freedoms as American citizens.

It is our responsibility and calling as Christians to stand up for the rights of the oppressed. While protesting is just one of the ways to accomplish this goal, it is certainly an appropriate time for a Christian to participate in a peaceful protest.

Protesting Must Be Peaceful

This fact can not be emphasized enough. We are called to be peacemakers, to pray for our enemies, and to love our neighbors. A Christian should never participate in a protest that results in rioting, looting, damage to property, or injury to other people. Protesting must be done legally with no intention other than bringing awareness to a cause.

Unfortunately, far too many protests end in these tragedies, leaving a bad impression on both the cause and the people involved. Before protesting, it is important to know your protesters’ rights.

Christians Must Carefully Consider Why They Are Protesting

In today’s society, it is far too easy to be influenced by an emotionally-charged social media post, or by a cause that seems “trendy” for lack of a better term. As Christians, we must carefully consider why we are protesting. What is the goal we are hoping to accomplish?

Christians must research both the cause behind the protest as well as the individuals involved. We must be certain that we are protesting for the right reason, not simply for the approval of our peers.

Throughout the Bible, Jesus teaches His followers to pray for their enemies instead of attacking them. He teaches them to turn the other cheek instead of retaliating. We must remain true to this calling, protesting only in a way that is peaceful and beneficial to the cause.

Christians must also be clear on what they are protesting and why they believe it is unjust. Far too often, individuals protest an issue that they simply do not understand. Many political and social decisions are made with good intentions and simply misconstrued by people who do not see the whole picture.

Before protesting, we must take time to educate ourselves on the issue at hand. We must pray for wisdom on whether it is a cause worth protesting or if other actions would prove to be more beneficial.

Consider Other Alternatives to Protesting

Protesting, of course, is just one of many ways to stand up for the oppressed. We must understand that protesting may not always be the most effective or efficient method of fighting injustice.

As Christians, we know that prayer is a powerful weapon against injustice. We must pray for justice to be served and for the rights of the oppressed to be upheld. However, in addition to prayer, we can take other actions. If the issue is a political matter, consider talking to your city or state officials. It is also important to consider ways that you can make an impact within your circle of influence.

How to Respond to Political & Social Protests

With protests currently trending in America, how is a Christian to respond? After considering the topics mentioned above, there are a few practical steps you can take.

Blessed Are the Peacemakers

Matthew 5:9 says, “Blessed are the peacemakers, for they shall be called sons of God.” In everything we do, we are to pursue peace. Even in protest, we can pursue and promote peace, choosing to stand up for our beliefs without taunting, rioting, or accusing.

Unfortunately, many Christians simply turn a blind eye to injustice, unsure of how to respond. We are called to do the exact opposite! While it can make us uncomfortable to see injustice and oppression in our cities, states, and nations, we must take action.

By peacefully protesting, electing high-quality leaders, and promoting common sense rules for government, we can continue to fight back against the injustice that prevails.

How can you take action to encourage change? Maybe you are called to run for political office? Maybe you have a calling to bring awareness to injustice in your community. Whatever your calling, it will take courage and bravery.

Remember that justice is at the very heart of Scripture. By working to encourage change, whether through protesting or other means, we are creating a nation that provides equality, liberty, and justice for all.